That word sums up my weekend perfectly.

We had a sick kid. He's better now, I think, but this weekend kind of sucked.


1.
It was beautiful on Friday.
Warmish (for Minnesota in April) and the snow was melting.
We had just received about 3 inches of snow the night before, so it's nice to see it go quickly.
I had to make a run to Target for stuff because that's what I do when I'm bored.
I was getting warm in the car and decided to roll down my window.
Because I rolled mine down, Declan wanted his down.
So, I rolled it down a little for him, just so he would be quiet.
What I failed to notice, was the 3 inches of snow melting on the top of my car, had started to move.
I turned a corner, maybe a little too quickly, and heard screams from my backseat.
Not bad screams.
Shocked screams, maybe, but then lots of laughter.
I looked back there and saw this: 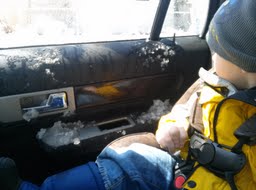 Oops.
That's awkward.
This is one moment I'm glad my husband wasn't in the car with me. 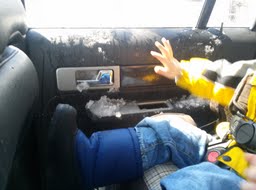 On the bright side, Declan is happy. 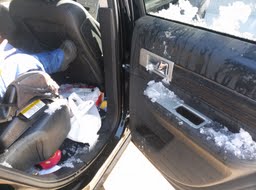 Does this count as cleaning the inside of my car?
2.
Evan has a cough and I gave him some kids Mucinex to calm him down.
I had the bottle on the bathroom sink and when he went to brush his teeth, he noticed the little green guy on it. 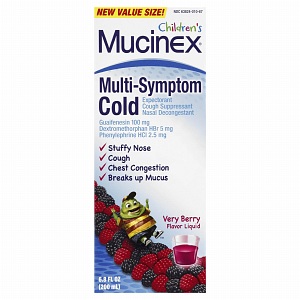 He came up to me after and asked, "Mommy, I know what's inside me now!"
Me: "What are you talking about?"
Evan: "I saw the bottle of medicine and I know what's inside, making me sick."
Me: "Hold on, I need to grab a pen....are you talking about the green guy on the bottle?"
Evan: "Those little green guys are having a party inside my belly. They are green germs."
Me: "I think the medicine will get rid of them."
Evan: "I didn't take the medicine. It tasted gross. I like them dancing in my belly."
Me: "Great...just great."
Evan, after getting up and shaking, "They like when I do this."
Me: "I think those guys are the bad guys..."
Evan: "Not mine. Mine are good ones. I'm keeping them."
Me: "Ok...I give up. You're still going to school."
3.
Because that wasn't enough fun, my kids decided to create their own entertainment.
My twins wanted to play "jump-jump", which is a trampoline in our basement.
I put them down there while I did the dishes upstairs.
It's fairly safe down there, but I'm a food/supplies hoarder and keep it all on shelves.
They've never messed with it, but there's a first for everything.
I can hear everything that goes on downstairs.
But when you start to hear nothing, you know there's trouble afoot.
My twins created their own game.
It's called, "Trampoline, slip-in-slide of doom".
I call it, "A huge mess that sucks to clean up". 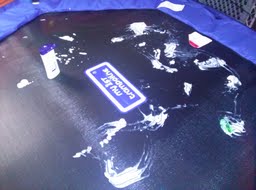 A bottle of lotion squeezed out and rubbed in.
They even put some cars through it.
Want to know how to clean it up?
(Because, you may need this someday...)
Step 1: Wipe up lotion with approximately 60 paper towels.
(Cringe at the waste of both products.
Spend 5 minutes rubbing lotion into exposed skin so you don't feel too bad.
Think about scraping some back into bottle,
but get over that after you realize you are too tired to care.) 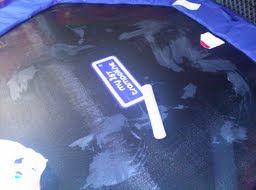 Step 2: Realize that it's going to take more than just paper towels to get that off.
Consider just leaving it and seeing what happens when they jump on it again.
But then you decide to try some cleaning wipes. 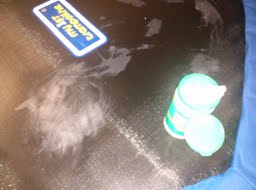 Step 3: Wow. That did nothing.
Once again, you think about leaving and just seeing if time will make it go away.
Realize that's just the "tired" talking and try again.
Grab your 409, spray and wait. 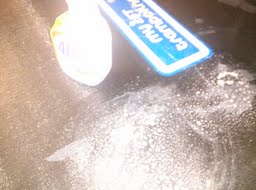 Ooooh bubbles. This is totally going to work.
Wrong.
So wrong.
It "looks" better, but still feels super slippery.
Have you ever rubbed a bathtub down with baby oil then tried to stand in it?
No?
Try it sometime. That's our trampoline right now.
A new, high-risk, but highly entertaining factor in the regular jumping game.
You may not be able to see it, but it's there, sitting quietly...
waiting for your dumb butt to forget.

I LOVE comments...except bad ones. You can keep the bad ones. Or maybe disguise them as nice ones. I know people that are really good at that. 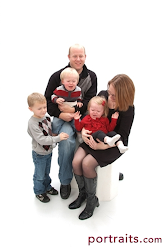 Yes, this was our Xmas Card.

Danielle
I'm the Ringleader of my own 3-ring Circus (Stay at home mom with 3 kids) trying to juggle my kids, house cleaning and my sanity. I have 3 adorable, devious children, Evan (7) and twins Declan and Morgan (4). I also have a husband, who swoops in to save my day from overflowing trash, spiders and sometimes keeps me from going completely crazy (unless he's run out of clean socks, then I'm doomed). My life is chaos, but I love it.